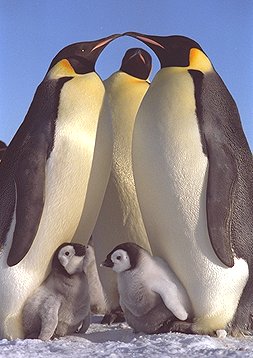 The movements of two gigantic Antarctic icebergs appear to have dramatically reduced the number of Emperor penguins living and breeding in a colony at Cape Crozier, according to two researchers who visited the site last month.

The colony is one of the first ever visited by human beings early in the 20th century.

"It's certain that the number of breeding birds is way down" from previous years, said Gerald Kooyman, a National Science Foundation-funded researcher at the Scripps Institution of Oceanography in La Jolla, Calif.

Kooyman took aerial photos of the colony in August during the flight missions that preceded the official start of the Antarctic research season. He returned to visit the colony in October, after the season was underway, with Paul Ponganis, another NSF-funded Emperor researcher who also is at Scripps.

The photographic evidence and the scientists' observations on the ground, Kooyman said, indicate the colony has scattered into at least five subgroups. The disruption appears to be caused by grounding in the past two years of two enormous icebergs-B-15 and C-19-near Cape Crozier.

He said that two years ago the colony was home to approximately 2,400 adult Emperors and approximately 1,200 chicks. Aerial photographs showed the researchers the current distribution of the birds and the number of groups, but they did not provide details about the number of breeding birds and the conditions in the colony. Kooyman said the site visits confirm what the photographic evidence appeared to show: ice conditions produced by the collisions of the giant bergs with the shoreline forced the bird colony to break up into smaller subgroups and also indicated the numbers of chicks and breeding pairs is greatly reduced from previous years.

"The colony had been fragmented into at least five groups. I think that's a habitat problem," he said. "The habitat is disturbed from the previous years, and I think it stays that way."

But, Kooyman said, his visit showed conditions for the birds are not as severe as he expected.

"I was expecting to see just about total failure," he noted.

But a comparison with another Emperor colony at Beaufort Island, Kooyman said, also shows that the Crozier birds have been less successful finding food for their young.

He also said that shifts in the ice might have caused additional fatalities. "We could not find one group. It looks like they were in an ice canyon that was eliminated by two ice plates running together," he said. As to the fate of the birds, "It's a question of whether they got out of there or got crushed. It's impossible for us to determine that."

The Cape Crozier colony is noted in the history of Antarctic exploration. In 1911, three members of Robert Falcon Scott's ill-fated South Pole expedition hauled a sledge 60 miles from Scott's base at Cape Evans to Cape Crozier, on the far side of Ross Island, in complete darkness and sub-zero degree (F) temperatures, to acquire three unhatched Emperor egg from the colony. At the time, Emperors were thought to perhaps represent an evolutionary "missing link" between reptiles and birds.

Kooyman the recent survey of the colony was conducted in "very demanding" conditions almost exactly a century after that episode. Airlifted to the ice near the colony by helicopter, "we took three days in fine weather to traverse the entire area because the ice was so broken up." The period of fine weather was followed by a summer storm.

Kooyman and Ponganis will compare notes on the health of the Emperor colony with David Ainley, an NSF-funded researcher who, as part of a long-term study on Adelie penguins, has been following the effects of the icebergs on Adelie colonies.

Ponganis noted that the icebergs causing the environmental change affecting the Emperor colony appear to be moving away from the area. But he added that the opportunity to study their effects on the birds adds to scientific knowledge of Emperors and their ability to adapt to change.

"It's an incredible natural experiment as far as the physical effects on the colony and how they deal with it," he said. "Crozier is a good test of all kinds of conditions that Emperors can deal with." 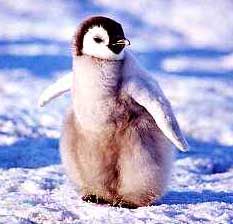