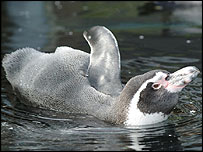 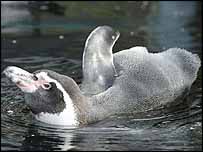 Gay rights activists have protested at a north German zoo's plans to test the sexual orientation of six male penguins which have displayed homosexual traits.

Bremerhaven's Zoo am Meer said it would introduce four extra female penguins from Sweden to the group to see if the males really were gay.

But zoo director Heike Kueck said "gay groups worldwide have been cursing us since that announcement".

The zoo says it just wants to encourage the rare Humboldt penguins to breed.

The males have been observed trying to mate with each other and trying to hatch offspring out of stones.

"We don't know whether the three male pairs are really homosexual or whether they have just bonded because of a shortage of females," said Mrs Kueck, quoted by Germany's Der Spiegel news magazine.

Gay groups insisted that penguins had a right to form couples without human interference, she said.

"Nobody here wants to forcibly separate homosexual couples," she said.

Only one baby Humboldt penguin has been born at the zoo, which has six males and four females, Der Spiegel reports.